How do we go about increasing the survival rates of released fish? 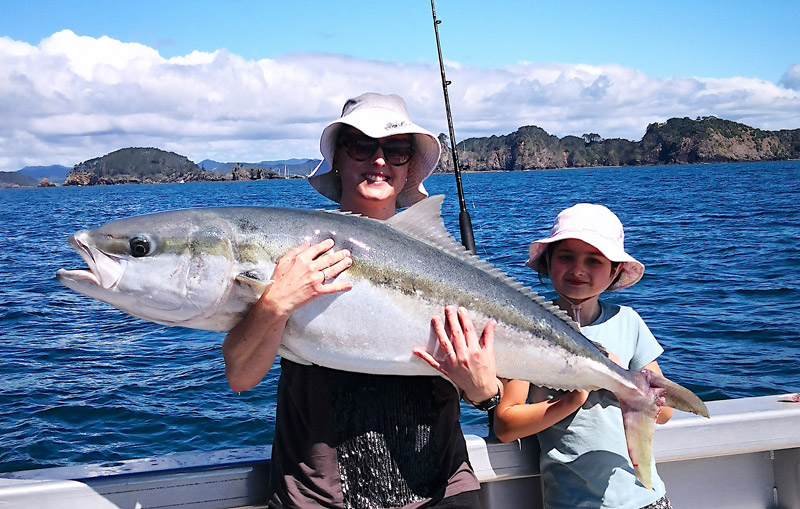 What an amazing start to the season! With such great weather and temperatures more like the height of summer, many are thinking it is time to be out on the water fishing. There is certainly an increase in fish activity as the water temperatures start to rise with great catches of both Snapper and Kingfish being bought it. A recent lucky lady angler landed this super-sized Kingie of at least 30kg along with several nice Snapper. The Snapper went home headed for the table with the Kingfish was released to live another day.

Whether catch is kept or released is the angler’s choice aboard Earl Grey II although fish must of course be at least legal length and within the anglers’ catch limit for the day before they are kept.

We are seeing a growing trend for anglers to release catch that is excess to their needs, a pleasing move in the right direction if we want to protect our fish stocks for future generations. But it is important that fish are handled properly if they are to have any chance of survival.

With the abundant catches we are having and expecting over coming months it is timely to go over some pointers on releasing fish.

With so many different types of rigs and lures available to the angler today, it is difficult to focus on one type of rig but when you are intending to release any catch it is important to use a method that ensures a mouth hook up rather than gut or gill hooking fish. A recurve hook rather than a J hook seems to be more inclined to mouth hook fish.

Poor handling is a major factor leading to high mortality rates of released fish. We see a common tendency for anglers to squeeze the fish while trying to remove hooks. Putting fingers in the gills or squeezing below the gill area will most certainly cause fatal damage to vital organs. Likewise holding heavy fish by the tail, not supporting a fish’s body while out of the water and lying fish on a hot, dry deck will also cause fatal injuries.

Steve suggests using long nose pliers to ease hooks from the fish while it is either supported in the water or held in a wet towel …… or better still lay them on a cool wet towel on a flat surface. Any surface the fish comes into contact must be wet and cool.

Most of our popular fish species such as Snapper, Groper/Hapuku, Wrasses, Pink Mao Mao and Tarakihi use a swim bladder to maintain neutral buoyancy. These fish ‘blow up’ when pulled to the surface from deep water, as gas in their swim bladder expands faster than it can be reabsorbed into the bloodstream.  The effectof this sudden decompression when drawn to the surface is referred to as Barotrauma, and can be as mild as bloating which prevents them swimming back down to a comfortable depth, to massive internal injuries causing death.

Many anglers wishing to release fish that are obviously blown ‘vent’ them using a sharp knife or a hollow needle. This deflates the swim bladder or, if the bladder has already burst, releases gas trapped in the abdominal cavity, which may allow the fish to swim back down to a depth where it can recompress.

Pelagic species such as Kingfish seem to cope well showing no ill effects from the sudden changes in depths after being hooked in deep water.

Large fish regardless of the species have an improved chance of swimming and ultimately surviving if you gently cradle the fish in the water, until it moves off of its own accord.

And remember, the longer a fish is out of the water the less its chance of survival so make it snappy getting your photos.