What happens when you catch a baby Mako shark? 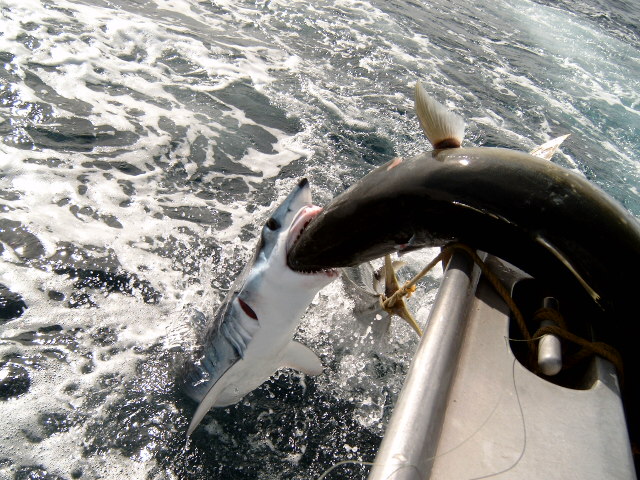 It is not unusual to catch various types of shark or at least have some form of shark action going on when targeting Yellowtail Kingfish with live bait. This particular day, while fishing a reef off Rocky Point in the Bay of Islands, one of our anglers hooked up a small Mako shark. Steve lifted the Mako shark aboard and, bearing in mind the razor sharp teeth that he would need to deal with, he carefully wrapped the shark in a large towel to calm it and to enable him to remove the hook from the Mako shark without damaging himself or this little fellow. Steve then gently lowered the Mako back into the water to swim away. But this little guy was so angry and indignant that he charged around the other side of the boat and launched himself at a Kingfish Steve had hanging by the tail over the side of the boat. Steve hangs the Kingies like this to bleed them which improves the quality of the flesh for eating. Mouth wide open and angry as, the little Mako got more than he bargained for. Sharks have reverse facing teeth to enable them to hold and tear at their prey. But in this case these teeth worked against the young Mako. We had to wait for him to release himself as no one was keen to put a hand down there to help him out. Eventually the baby Mako swam away unharmed to live another day but we suspect very much more indignant by this stage. 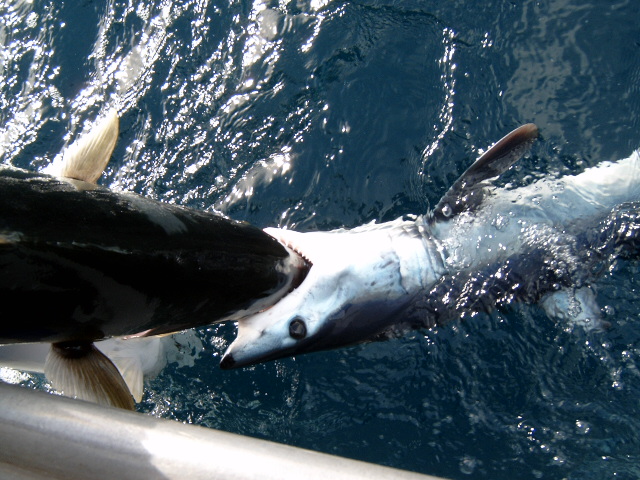 Shortfin Makos can leap up to 6 metres out of the water, often when feeding and shedding parasites but also after getting caught on an anglers line. That leads to a lot of weird-but-true headlines about Makos who have propelled themselves onto boat decks. On our original 6 metre charter vessel many years ago we had one such experience.  While targeting Kingfish one of our anglers hooked up on a Mako. Fighting a Mako has been compared to riding a bull or wrestling an enraged crocodile. This Mako made several leaps as he came closer to the boat, the last leap completely clearing the rods in the overhead rod holders. Certainly a never to be forgotten experience for both Steve and our anglers that day. Without a doubt the shortfin Mako is definitely a shark to be reckoned with.